The concept of ridesharing really is wild if you think about it. You summon a stranger, get in his/her car, and have them drive you somewhere...in many cases, to your own home. Yet more than a million people were active rideshare users by 2019. Uber holds the lion's share of this pot, at nearly 70%. Why were we all so willing to jump in the car? 3 main reasons:

But now, LikeFolio data suggests the tide may be turning. The chart below showcases mention growth for digital ridesharing services Uber and Lyft vs. traditional taxis. 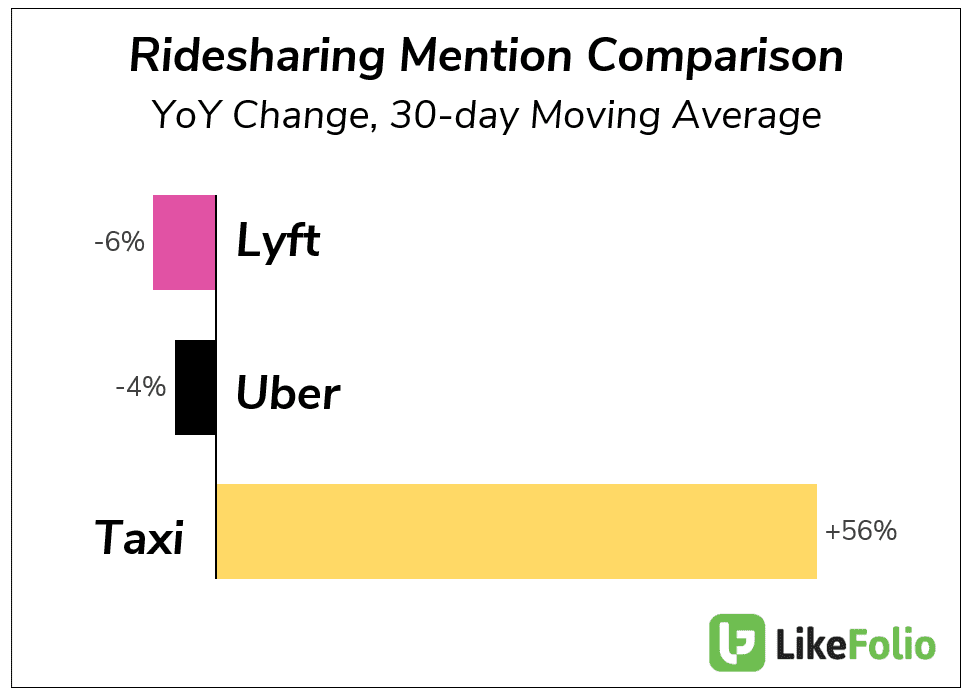 Wow. Why are taxis making a comeback? Uber and Lyft are losing the edges that initially helped onboard customers in the first place: Cost, Availability, and Ease of Use. A diminishing pool of drivers alongside rising demand has created an imbalance in the marketplace. The number of mentions from consumers indicating the price of an Uber or Lyft has gone up has increased +71% YoY. And these riders aren't crazy: the cost of a ride from Uber or Lyft increased +92% from January 2018 to July 2021, according to external research. In addition, the number of mentions from consumers indicating an Uber or Lyft is unavailable has increased +31% YoY. Meanwhile, many taxis are going digital via well-known aggregators, like curb. To be fair, Uber and Lyft both continue to dominate taxi mentions when it comes to total volume. However, the consumer is stressed, and data suggests not necessarily brand loyal.

Despite recent market volatility and some arguing for a bear […]

Read More
Expecting a Lyft into Earnings
andy
No Comments

Read More
DoorDash is Crushing the Competition
megan
No Comments