On the subject of rare earth metals and price squeezes, the silver squeeze movement has thus far failed to attain the success seen in the uranium market...But that doesn't mean the movement is dead.

This tweet from the user @stacksshiny does an excellent job of summarizing the current state of the #silversqueeze. 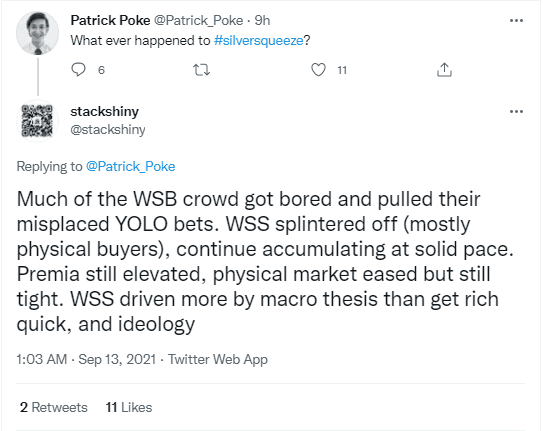 Wallstreetbets (WSB), the retail trading group which famously masterminded the GME and AMC squeezes, briefly set its sights on Silver, a notoriously shorted commodity -- However, once WSB realized it would be facing much stiffer competition than Melvin Captial the attempt was quickly abandoned. This event created a splinter group, Wallstreetsilver (WSS).  These traders prioritize a steady accumulation of physical bullion and champion the Sprott Physical Silver Trust ($PSLV) as their ETF of choice.
Although WSS lacks the sheer numbers (and reckless abandon) of its big brother WSB, the group has managed to create a lasting change on the physical silver market. More than 6 months after the initial silver squeeze attempt, the number of individuals talking about purchasing silver coins remains elevated, up +42% YoY and +105% vs. 2019 (7-day moving average).

As mentioned in the tweet above, premiums on physical silver remain well above the official spot price, 10-15% at minimum and upwards of 30% for high-demand items like American Silver Eagles.

A Closer Look at the Silver Shortage Yesterday, we highlighted rising […]