What Makes a Meme Stock? ($SDC)

What Makes a Meme Stock? ($SDC)

The successful efforts of WallStreetBets have fundamentally changed the market – Stubborn retail traders holding shares of failing companies with “diamond hands” have given rise to a volatile new breed of equity: the Meme Stock.

In short, Meme Stocks are failing companies with share prices detached from reality, supported by traders who care more about market mechanics than fundamentals.
Failing companies often acquire a significant amount of short interest. In times past, such companies needed an adequately bullish surprise to encourage shorts to cover, thus triggering a squeeze higher -- Once WSB traders realized that they could become the “bullish surprise” the Meme Stock was born.
SmileDirectClub ($SDC) is a prime example of a Meme Stock. Since going public in late 2019, SDC has failed to report positive EPS, missing estimates on 5/8 reports – On its most recent report (21Q2), revenue missed estimates by a large margin, declining -12% vs. 2019. Overall, SmileDirectClub looks dead in the water, with Consumer Demand trending -31% QoQ and -52% YoY (90d MA).

Despite the major disappointment of last quarter’s results, SDC shares have surged recent months-- SDC gained +15% yesterday, now up by more than +35% from the post-earnings lows.

SmileDirectClub’s stock-specific Mentions reveal the source of this unnatural vitality – Hordes of retail traders going long “for the memes.” 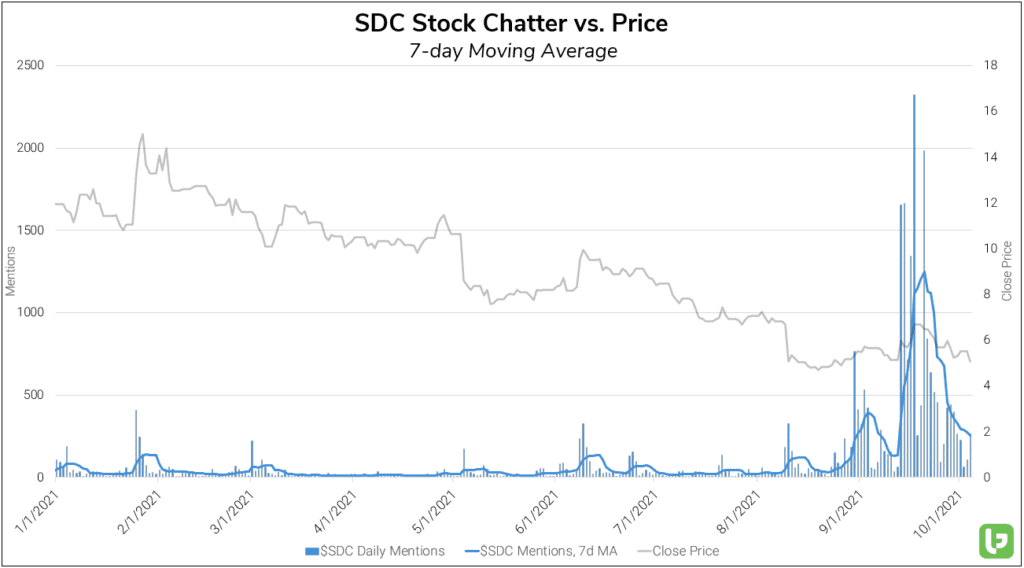 During the historic week in which Meme Stocks came into existence (1/25 – 1/29), SDC shares gained by nearly +50%.  Although the squeezers have had periodic successes since then, the short side has won out  overall.
If you’re tempted to join the fray, we recommend using inordinate caution, regardless of which side you take.

Can SmileDirectClub (SDC) Recover from Bad News?
veronica
No Comments

Align Crushed its Last Report...Now What? Align Technologies (ALGN) has […]

Read More
Could SmileDirectClub be the Next Short Squeeze? ($SDC)
veronica
No Comments

Could SmileDirectClub be the Next Short Squeeze? ($SDC) Last week, […]